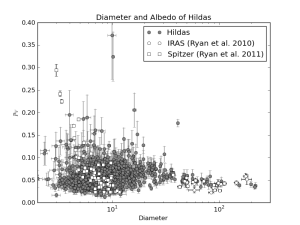 The diameter and albedo distribution of the Hilda population observed by the NEOWISE project.

NEOWISE observed more than 1700 Hilda asteroids during the cryogenic portion of the mission. The figure shows the results of the thermal modeling of these objects, revealing their diameter and albedo distribution. The results showed that the population is dark and dominated by C-, P- and D-type asteroids at all sizes, with only a handful of possible interlopers with different taxonomic types. The results were published in Grav et al. (2012) and the electronic table of diameters and albedos for all the Hilda objects observed are available at the publishers website.